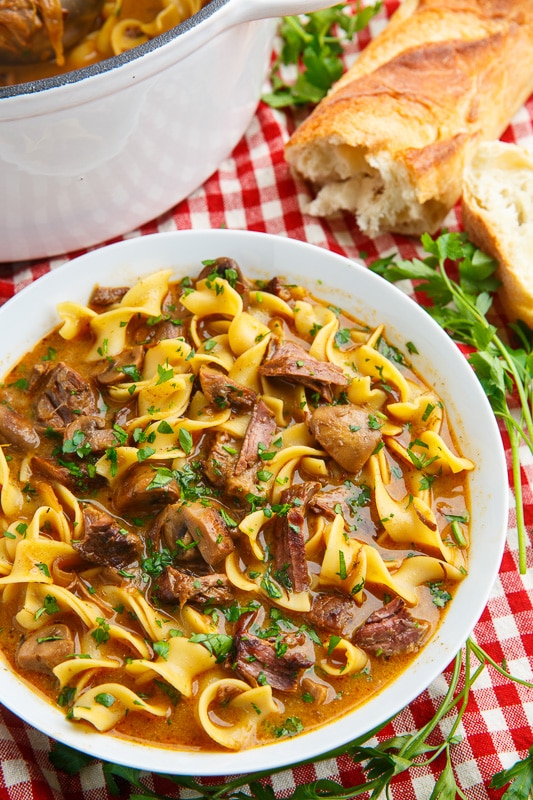 Slow Cooker: Optionally skip steps 1-4 and just place everything in the slow cooker (except the sour cream) and cook as directed, for a quicker version.
Option: Start by cooking 4 strips bacon cut into 1 inch pieces and use the bacon grease to cook the steak and veggies in instead of oil and butter adding the bacon back into the sauce near the end!
Option: I like smoked hot paprika for this but your favourite type of paprika will work!
Option: I like dried dill in this but it is a none standard ingredient so feel free to omit it.
Option: Add a pinch of red pepper flakes with the garlic for a bit of heat.
Option: Add small onions in addition to the diced onion for even more onion flavour!
Option: Instead of the fish sauce use 1-2 tablespoons white miso paste.
Option: Add 1 tablespoon tomato paste to the sauce.
Option: Add 1/2 cup grated parmigiano reggiano (parmesan cheese) for an even more flavourful sauce!
Option: Serve topped with cheese and melt it under theNutrition Facts: Calories 322, Fat 10g (Saturated 3g, Trans 0), Cholesterol 74mg, Sodium 743mg, Carbs 18.9g (Fiber 3g, Sugars 5g), Protein 33.2g