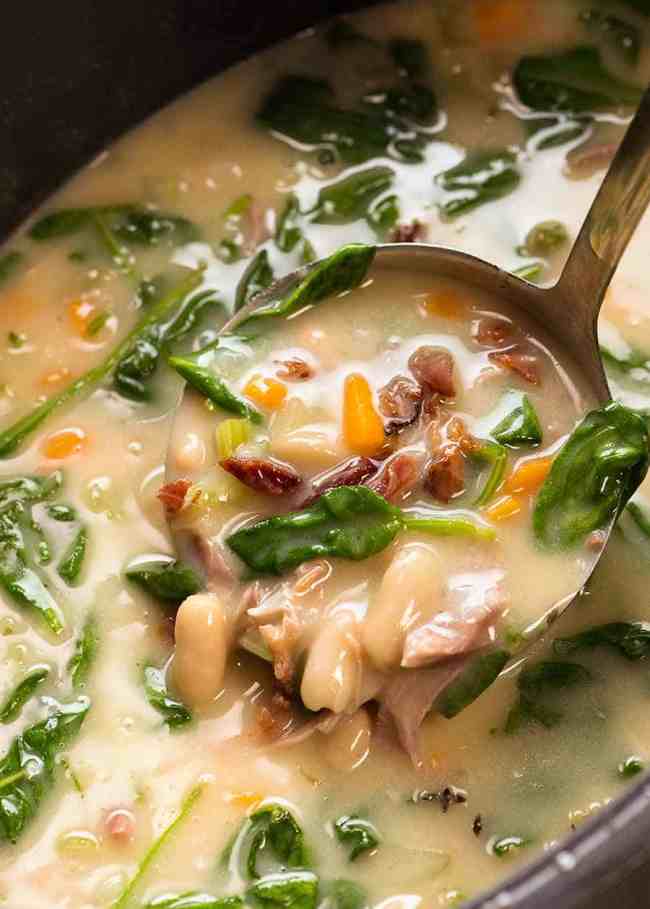 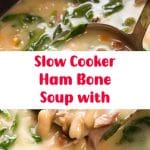 Recipe video above. This is a Ham Bone Soup made using the slow cooker which is the most effortless way to cook leftover ham bone. Set, forget, fall apart meat, flavour infused soup!You’ll love the creamy broth (but no cream!) and tender beans that absorb the flavour. Leave some of the ham tender and juicy, pan fry some to make it crispy. It’s the best of both worlds!

1. Leftover Ham Bone – If your ham is looking a bit skimpy, you might want to buy some ham to dice up and throw into the soup. If the bone won’t fit into your slow cooker, try break the knuckles with your hands or take it to your friendly butcher to cut in half (or dig out your saw). Can also use store bought ham bone hock .2. White beans – More beans = chunkier soup. Great northern, cannellini, navy. No need to soak because we’re using the slow cooker.Canned beans will also work but dried is better because it absorbs more flavour as it cooks and you can control the texture better. Stir drained canned beans into the soup when you add the shredded ham back in. May need extra cornflour to thicken broth (as dried beans soak up more liquid than canned)3.  Vegeta is a type of stock powder sold in supermarkets. Vegetable or chicken stock powders will also work nicely here, or crumble in a bouillon cube.4. Greens – about 2 to 3 handfuls. Or use chopped normal spinach, silverbeet or kale.5. General:
– Soup colour will differ depending on your ham bone. More skin (leathery brown stuff) = browner broth (and more flavour) = off white soup. Less skin = whiter soup.
– Soup is not intended to be a really thick soup as I find it makes it too heavy (it’s quite rich). But if you want a thicker broth, simply add more cornflour/cornstarch mixed with equal amount of water/milk – add a bit at a time, as soup heats it will thicken.6. Storage – store in fridge for 3 to 4 days. If you freeze, cornflour will lose it’s thickening power so you’ll need to add more when reheating to re-thicken soup (see Note 5). Works perfectly, I tried it.7. Nutrition is a guide only. It’s virtually impossible for a non-scientist to calculate the nutrition in the ham bone broth, I’ve done my best!